In which Amy-Lynn and I get lost in the woods.

I must write this while all the awful details are still fresh in my feverish mind.

Amy-Lynn and I went for a walk in the woods today.  I like walking with Amy-Lynn as she doesn't think me silly for loving fungus and lichen and moss.  In fact she not only shares my love of nature, she is my Obi-Wan, and I, her delighted pupil.  A-L know tons of neat stuff about nature. 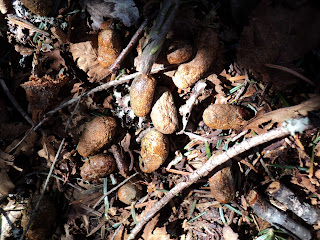 Who pooped here ?   She knows. 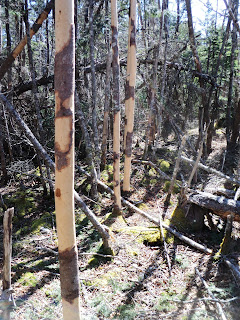 Who chewed these trees ?  She knows. 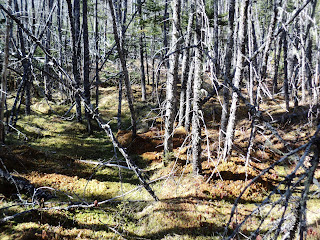 
And so what would have been a post about pretty forest things, bubbling brooks, feathery moss and porcupine chewed trees is not 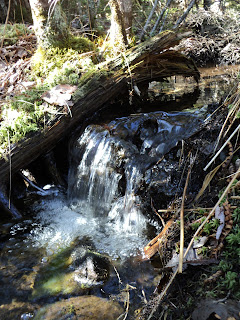 -- instead it is a post about getting lost in the woods. 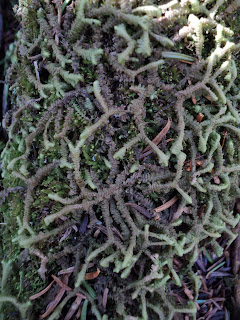 When the realization that we were lost finally dawned on us, we laughed and joked about it.  Being intrepid woodsy-sorta gals we knew we'd be fine, even though it had been almost half an hour since we'd had our granola bars and juice drinks.  Bravely we'd try to stave off  hunger and thirst and hang on as long as we could.

Cleverly, I demonstrated my full knowledge of what-to-do-when-lost-in-the-woods, to Amy-Lynn.

Stalwart souls that we are -- we forged on. 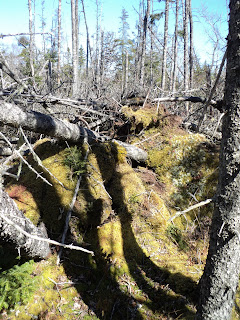 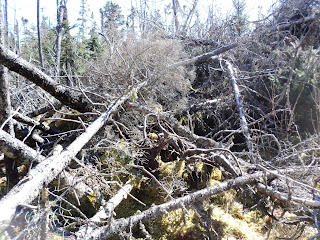 Close up we realized that that was a bit of an understatement.   It was an impenetrable wall of fallen trees. 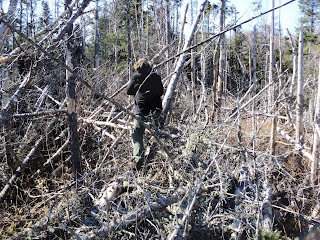 What had started out as a two-hour walk in the woods was starting to feel like Gilligan's famous "three hour tour".

Would we make it out before nightfall ?

Were we headed in the right direction ?

Would Sybil have to use her cell phone to call for rescue ?

Oh. Didn't I mention that I had my cell phone with me the whole time ?

But who wants to call home to ask to be rescued from the woods ?   I mean -- how embarrassing !

When we finally got past the tangle of fallen trees, several hours after we'd set out, we arrived triumphantly at the children's playground just two doors down from Amy-Lynn's house.

We'd had an adventure.

And we'd learned not to go into the woods without a compass or a GPS.


Note:  Amy-Lynn (Flandrum Hill)  version of the day is a tad different in that she doesn't even mention that we got lost !  ;-)   You can check out her version here.
Posted by Sybil at 6:46 PM