Before the blizzard blew in today, I thought I'd take Wendy, Trey and Sooki into the woods to flag some of the new trails that I'd explored yesterday.

Though it was already windy and snow was falling, it was lovely and calm deep in the snow-covered woods. 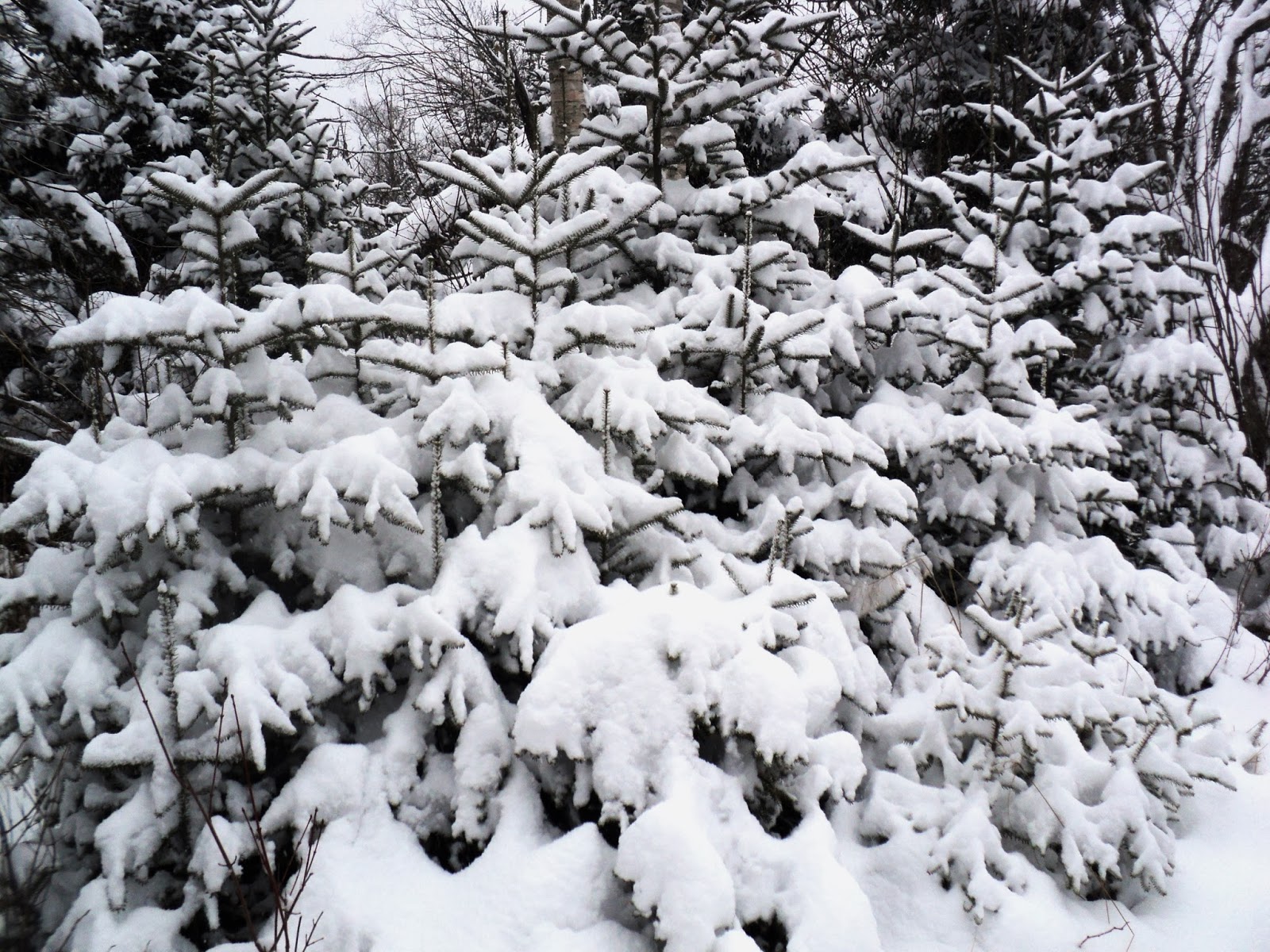 It was very overcast so I had brought my compass.  "How are those two things connected?", you ask.
In the winter the sun low in the sky passes behind my house, so by heading toward it, I can find my way out. Without the sun as my guide, I could get lost, or as I like to say "get temporarily mislaid".

Once in the woods, Wendy and Trey love chasing and looking for the ball.  Doesn't matter where it goes, I can always count on Trey's terrific nose to sniff it out.

Sooki has no interest in balls.  She revels in tearing around in an apparent random fashion her nose to the ground, the bell on her collar tinkling gently, always letting me know where she is.

We'd been walking and ball-tossing, and tying ribbons on trees for a while, before I realized I could no longer hear that tinkling bell.

I stopped and called her.

Sooki is a good girl and always comes when called, and when she didn't, and I still could not hear her bell I got worried.  When I stopped I heard a small "squeak" that seemed to emanate from the rubbing tree trunks above me.  Then I heard it faintly again.  I looked up and saw nothing that might have created the noise.

After five minutes of pacing and calling, something caught my eye.  Not far away.  Maybe 50 feet off one side of the trail in the brush, the snow looked odd.

"Why would the snow be pink ?" I wondered vaguely.

Suddenly every fiber in my being reacted with a JOLT !  Beside the "pink" snow stood Sooki.  But Sooki wasn't pink.   She was RED and her face looked so BIG !   WTF ??

In a flash I realized what had happened: reached for Trey, and clipped on his leash.

The tiny squeak I had heard, must have been Sooki's coup de grace.

She hadn't even cried out in pain as hundreds of quills pierced her tongue, mouth, nose and chest as the poor unfortunate porcupine tried to defend itself.

Trey could not figure out why I was hanging onto him, and then as I leashed Sooki too, I hurriedly started heading out of the woods.  After I felt safe that Trey wasn't going to go after the carcass, I let him off his leash and concentrated on getting poor Sooki home.  Blood was foaming from her mouth and covering her legs and dripping onto my boots.  I was grateful that I didn't take too many wrong turns on our way out.  Sooki was now clearly in agony, and trying to rub her face along the snowy ground which turned pink in our wake.

Dear Wendy let me hold her collar, and she pulled me up the hill that leads out of the park as I gently tugged Sooki behind me.

Once finally home, I YELLED to Kait, "CALL THE VET -- WE HAVE AN EMERGENCY !".

Before you scroll down, let me tell you that Sooki is back home now and will be fine.

OK, you were warned. 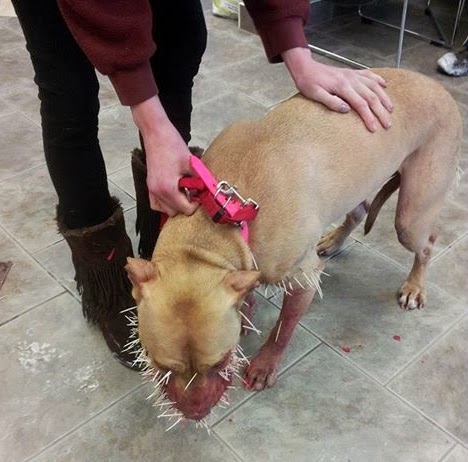 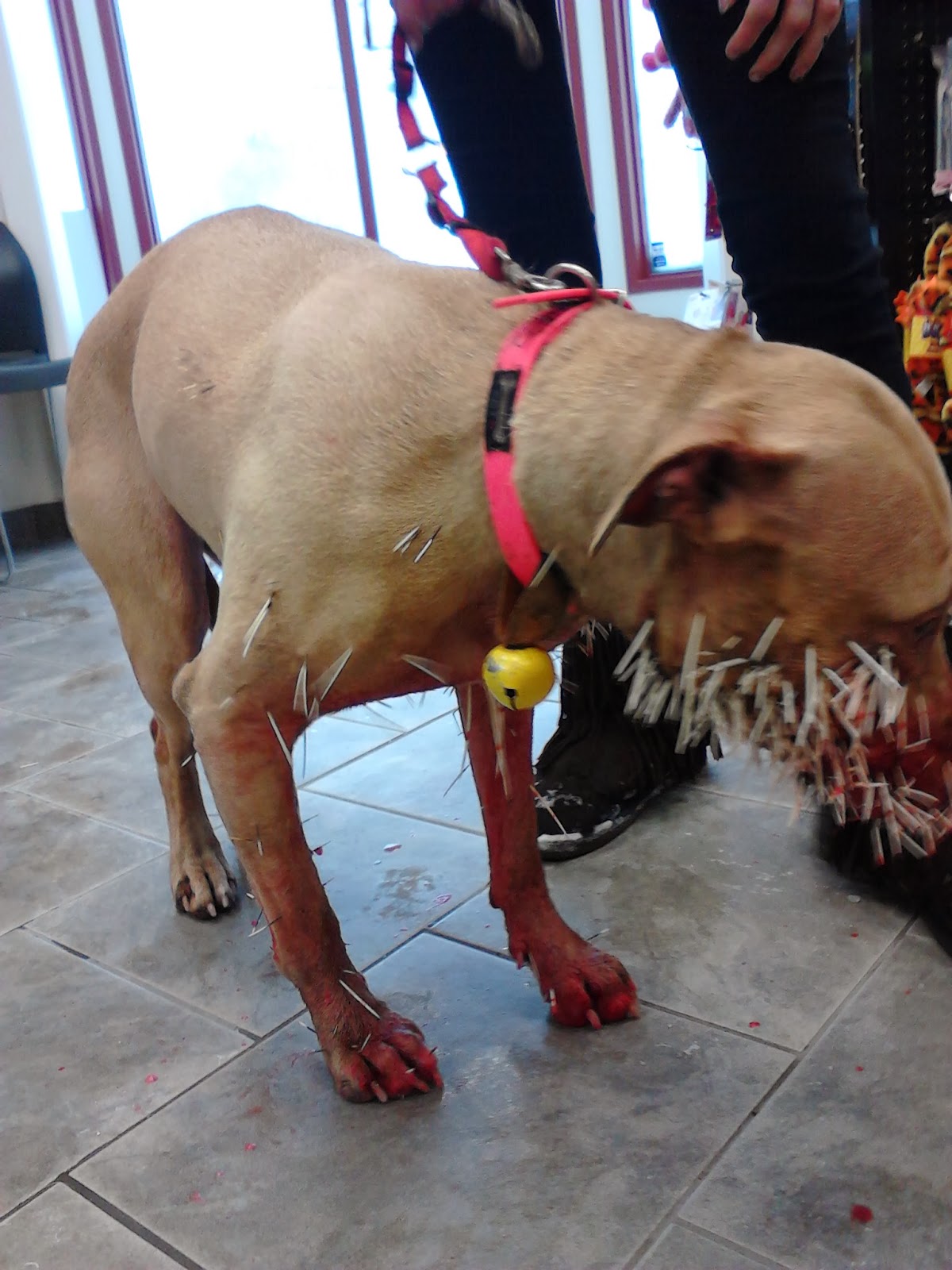 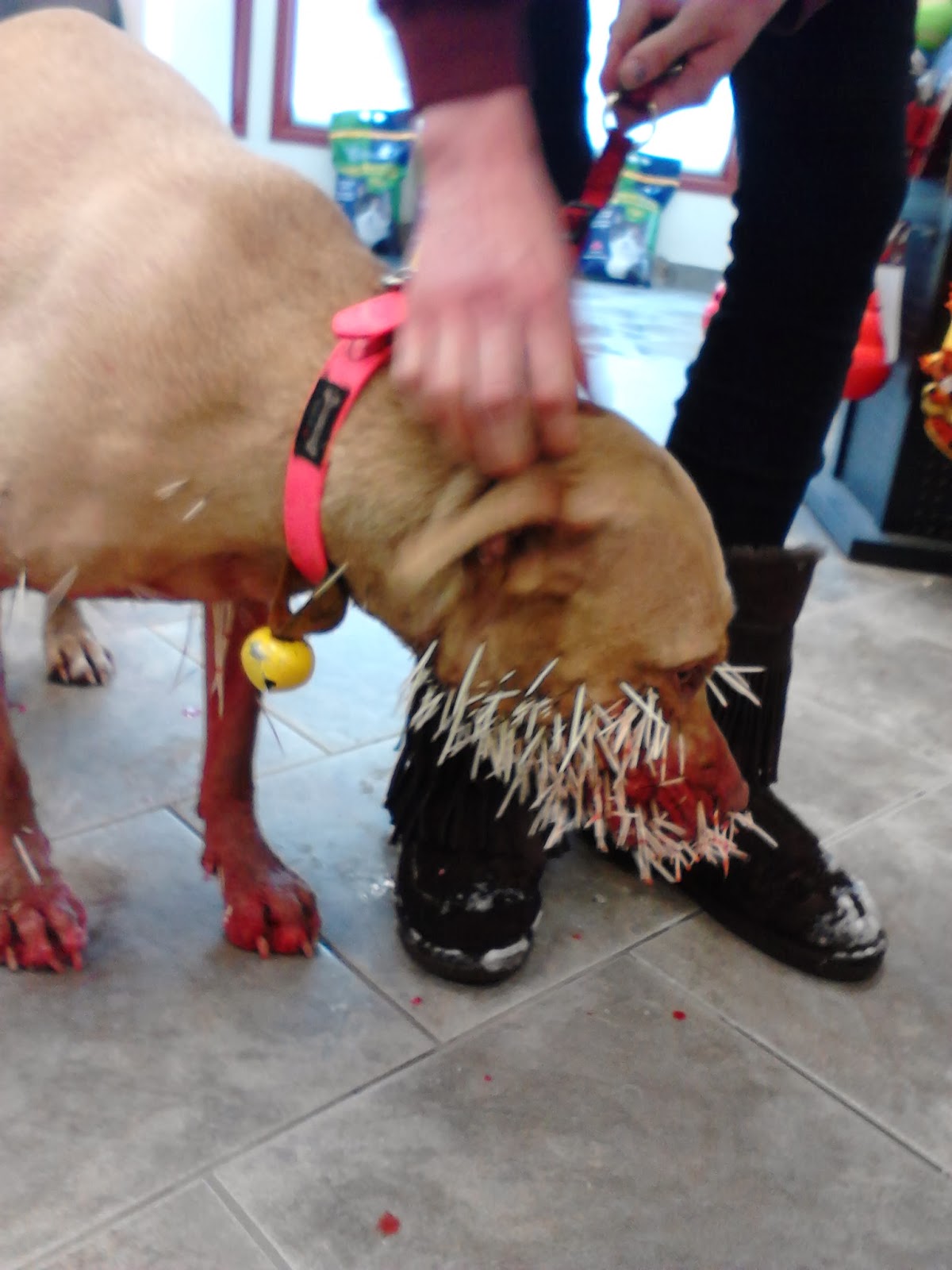